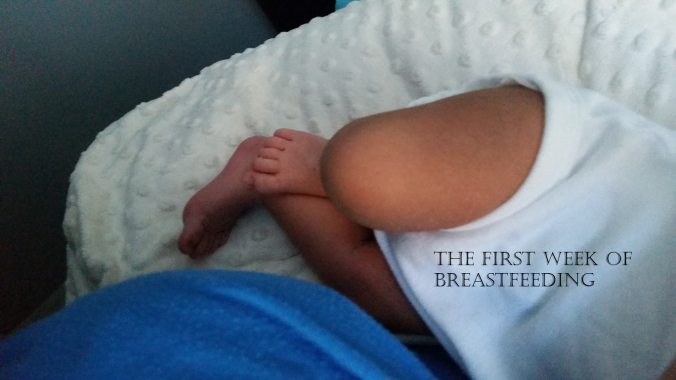 It’s the question I’ve been asking myself for so long… how will breastfeeding go with my second?  Well let’s start at the beginning.

After a most amazing and unexpected waterbirth (to be recounted in a separate post), Baby B spent a few minutes on daddy’s chest while I got dried off and into bed.  Then he was on my chest for the next 2 hours, uninterrupted.  I cannot tell you how amazing it was to have this time with him.  No one was whisking him away to get him measured, no one was swaddling him up like a burrito or putting mittens on him.  It was just as it was meant to be – on mama’s chest, skin-to-skin.

The first and most important task was obviously to deliver my placenta and prevent another postpartum hemorrhage like I had with my last birth.  Oxytocin is required to produce the contractions necessary to expel the placenta, and nipple stimulation is a key component of producing oxytocin.  Given my history, and with a larger-than-average placenta, it seems I might need more than a typical amount. Many babies don’t breastfeed well until closer to the end of the “golden hour,” and that was certainly the case with Baby B.  However, I came prepared.  When my midwife told me I was on the verge of having excessive bleeding, we pulled out my manual breast pump and got to work.  Within minutes, the bleeding stopped.  When it started again 10 minutes later, we used the manual pump again, and it stopped the bleeding once more.  The plan had worked.  No postpartum hemorrhage.  No synthetic Pitocin necessary.  And the icing on the cake – no stitches needed either!

Even though Baby B had been on my chest this whole time, and I had been trying to get him to latch, I think all of the commotion had been too distracting.  With nurses pushing on my abdomen, me shrieking every time they did, and the imminent threat of hemorrhage, it was probably too much to expect a perfect latch at this time too.

After about 45 minutes, everyone had cleared out of the room. I was exhausted and ravenous – my husband and doula supplied me with a constant rotation of juices and crackers to help keep my energy (and blood pressure) up.  And now we were finally able to focus on breastfeeding.  We had collected a little bit of colostrum using the manual pump, so we put some on a spoon and dripped it into Baby B’s mouth to get him interested.  It seemed to grab his attention, and we were able to finally get a good latch in a laid-back breastfeeding position.  He nursed on and off for about an hour.  At first blush, it felt like it was going better than it did with my daughter, but I was wary.  We’d see how the next 24 hours went.

The next 2 feeds in our postpartum room were not great.  My heart sank.  My attempts to get him to latch in a laid-back position were not working.  They had worked the first time, why weren’t they working now?  I always heard about friends saying immediately after their own births, he nursed like a champ. I’ve always hated this expression.  What does it mean?  Does it mean that if my baby doesn’t nurse well right away, like a champ, that we’ll never get there?  Does it mean that it’s an innate behavior, not a learned one?

Now, I’ll admit it.  I had a moment of panic.  A moment of I-just-had-a-baby-8-hours-ago-and-the-hormones-are-making-me-crazy. A moment of what if this is like the last time.  I looked around in his mouth.  I’m not a professional, and I can’t diagnose tongue-tie and lip-tie.  But my first instinct was to call the pediatric ENT and make an appointment, just in case.  I knew it’d be a 2-week wait anyways, so there was no harm in making the appointment for a consultation.

And next, I pulled out my trusty old double-electric pump.  As soon as the colostrum began flowing, I relaxed.  It would be okay.  We’d get through it, we’d figure it out.

The lactation consultant happened to come in while I was pumping.  Baby B was fast asleep, so she couldn’t look in his mouth.  But she stayed and gave me some tips for the next feeding (cross-cradle position works well for newborns, here’s how to do the c-hold, etc.).

The LC stopped by again before our fifth feeding.  And she said all the right things.

You have great technique.  He doesn’t look tied.  He has a nice, broad palate.  Keep doing what you’re doing.

From my postpartum nurses: The first 24 hours they’re really sleepy, don’t worry about the number of times he nurses. It’s the second day that they really wake up.

From my pediatrician: His tongue and lip look fine, there’s nothing here that I see that needs to be addressed. 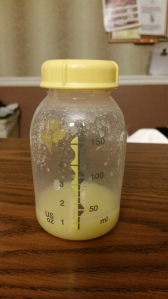 We made it through the first 24 hours, nursing and spoon-feeding the pumped colostrum.  Maybe we would have been fine if I hadn’t panicked and pumped.  But it did 2 things for me: 1. Gave me a tool to help wake him up for more productive nursing sessions. 2. Gave me the reassurance and confidence that he was going to get what he needed, and keep his blood sugar up.

And I can’t over-emphasize that confidence enough.  The reassuring words from my healthcare providers and the confidence that we could figure this out is what has carried us through this first week.

And most importantly, there’s the way you nurse when you’re panicked vs. relaxed.

My point is, the first week is a huge learning curve. It’s not about nursing like a champ; it’s about learning like one.  And it takes a lot of confidence and support to get through it. It’s about not watching the clock, and watching your unique baby. It’s about learning their cues, listening to their sounds, and understanding their needs. It’s about your family never questioning is the baby eating again or didn’t he just eat. It’s about feeding on demand, even if that looks like this:

I stopped using the tracking app right after Baby B’s first pediatrician appointment, on day 4.  His birth weight was 8 lbs 10 oz, his discharge weight was 8 lbs 3 oz, and his first weight at the ped was 8 lbs 8 oz.  He was doing great.  And I was confident.

There’s still a long way to go.  Breastfeeding is a journey, and it’s going to change from week to week.  I’m sure there will be other challenges. But we survived the first week.  More than survived, thrived.  We laid in bed all day, we cuddled, and we snoozed.  I listened to his quiet breathing, his sweet gulping, and all of the other uniquely newborn sounds that will soon fade away.  I breathed in his hair, stroked his feet, and kissed his cheeks.  I soaked in everything I could about this moment in time that I’ll never get back. I’ve learned so much this week, this first week of my baby’s life.  I’ve learned the power of a reassuring word and some confidence.  If you can provide that to a mother and her new babe, please do.

Follow The best season of my life on WordPress.com

The best season of my life
Blog at WordPress.com.